In this post, I'll recommend some accessories for the Onyx Boox Note 3. The accessories listed are ones that I use and like: 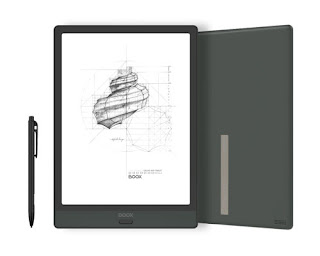 The Note 3 is Onyx Boox's latest 10.3-inches note-taking e-reader. It is an incremental update to the previous generation and does not offer anything significant that justifies its release. I've been using the e-reader for a few days and below are my initial impressions:
In general, I am impressed with the Onyx Boox Note 3. A future post will be dedicated to a more in-depth review.
at November 10, 2020 No comments: 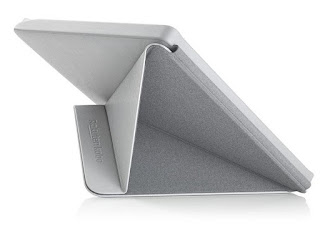 The a-symmetric design of the Kobo Libra H20 means universal 7-inches cases will not be compatible with the e-reader. Thus, it becomes necessary to find a cover designed specifically for the Libra H20 or a sleeve whose dimensions can fit the extra width of the device. Below are two covers and one sleeve that I recommend:
at October 30, 2020 No comments:

I've posted on why I think the Kobo Libra H20 is, considering its hardware features, the best value e-reader. In this post, as I've covered Kobo e-readers before, the short review focuses on general impressions that are specific to the Libra H20:

Overall, the negatives noted are outweighed by the Libra H20's hardware features that are found with premium e-readers (larger than 6-inches screen, the support of auto-rotation and side buttons). It costs only £30 more than the Paperwhite, but you get a lot more for that amount. The only significant issue that might put-off some users is the passable front light. The lighting does the job of providing illumination, but it might bother those who consider front light quality an essential feature to their reading experience.

Onyx Boox posted an article that details the design and production of the Onyx Boox Note Air. Two interesting points stand out:

(1) Initially, Onyx Boox planned to release the Note Air without a front light. Without the front light, the device would have been lighter and thinner (370g and 4.7mm). In my view, the added front light layer compromises the writing experience - most 10.3 and 13-inches e-readers don't have front lights - so it would have been better if Onyx Boox took the route of reMarkable and worked on optimising the screen for note-taking.

(2) In the article, Onyx Boox notes the smaller battery capacity is a compromise needed to get the required 'tablet' thinness. Onyx Boox isn't the only vendor to advertise their note-taking devices as 'tablets' - reMarkable also advertise both their first and second-generation devices as a 'digital paper tablet'. Thus, as with tablets, thinness becomes essential even if it means a trade-off for what are viewed as traditionally the virtues of e-readers - long battery life.
While the reMarkable 2 has the same battery capacity as the Note Air 10.3, it runs on Codex - reMarkable's own in-house Linux-based operating system developed for E-Ink. Nevertheless, it still has a larger battery capacity compared to Kobo and Kindle e-readers due to the extra power needed for note-taking. In comparison, other than the needs of note-taking, the Onyx Boox Note Air runs on Android 10.0. Interestingly, Onyx Boox notes this potential problem and state the following:

Therefore, some users are concerned that the 3000mAh batteries in the Note Air can only last a few days on one charge.
Actually, Note Air can last at least 4 weeks on standby mode.
Moreover, the two batteries are parallelly arranged to provide a capacity of 3000mAh in total. Such a structure enables a large space for the batteries and provides them with a higher voltage to speed up the charging. Together with Quick Charge 4.0, you can fully charge Note Air in just a few hours.

From the passage, it is not clear if the battery life will take a hit when using the Note Air for the main tasks it was built for, i.e. writing notes, sketching and reading. Instead, they merely affirm the device conserves battery in standby mode and charges quickly relative to other devices. I appreciate the front light is an essential feature for many users, so a trade-off with added weight and improved writing texture might be worth it. Trading battery capacity for thinness, on the other hand, is a downside that may repel some users.

An upside of most note-taking e-readers using EMR styluses is the relative ease to find alternatives (if you don't like the generic stylus Onyx Boox and Boyue include with their e-readers) or replacements. I've tried Samsung's EMR-based S-Pen on the Likebook Ares Note, and it worked without issue (the rubber-tipped S-Pen felt superior to Boyue's hard-tipped stylus). Wacom - the patent holder of electromagnetic resonance (EMR) technology - also sells styluses that are compatible with Remarkable, Onyx Boox, Boyue, and Supernote devices. Below are two available options:
Both options above are battery-free, have an 0.7 mm tip and 4000 pressure levels.
at September 30, 2020 No comments:

Something different from Onyx Boox 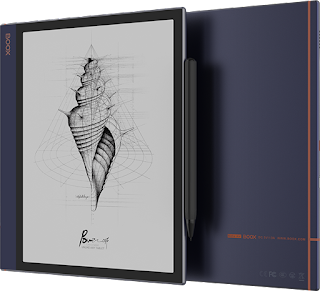 Onyx Boox regularly releases new devices, so that it becomes difficult to follow the logic or need for a new iteration. One note-taking e-reader that was announced recently is the Onyx Boox Note Air - an e-reader that is slightly different than anything Onyx Boox released in the past.

The design of the Onyx Boox Note Air is closer to the Kobo Forma, Libra H20 and Kindle Oasis, with one end of the device wider than the other. The one-sided extra width makes the device more comfortable to hold and rotate for landscape viewing. Onyx, for the first time, also added a built-in G-sensor to enable auto-rotation of the Boox Note Air. Another update is the re-design of the stylus that magnetically attaches to the side of the e-reader. Other Onyx Boox e-readers use a generic EMR stylus that Boyue uses too.

One worrying aspect of the Boox Note Air is its 3000 mAh battery capacity. In comparison, the Onyx Boox Note 2 has a larger 4300 mAh capacity. As noted in previous posts, Android e-readers consume more battery, and the EMR touch layer also drains the battery quicker with extensive stylus input. The Likebook Ares Note has a similar battery capacity as the Boox Note Air (3300 mAh) and I found that it drained quickly when writing notes and using third-party Android applications.

Overall, the Onyx Boox Note Air is a unique device and is not part of the Note 10.3-inches series. It does offer some upgrades to the Note 2 - a faster processor, DDR4 RAM (although it only has 3GB RAM) and Bluetooth 5.0. At the same time, there are downgrades in comparison to the Note 2 - smaller battery capacity, less RAM, half the storage, single speaker, no fingerprint sensor, no Mobius backplane and heavier weight (despite being called the Boox Note Air!). On balance, as there are more downgrades than upgrades, the Onyx Boox Air costs slightly less than the Note 2. In my view, the biggest issue is the smaller battery capacity, so it will be interesting to follow the opinions of users on the longevity of the battery life.